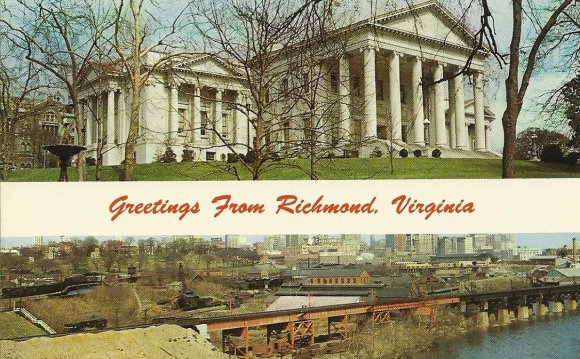 A couple of young doctors at Hampden-Sydney College dreamt of establishing a school for medical and scientific learning in Richmond, Va. In 1838 The Richmond Department of Medicine, endorsed by the Medical Department of Hampden-Sydney College, rented the Union Hotel for its classrooms and infirmary and opened its doors for learning, foreshadowing what has now grown into the Virginia Commonwealth University Medical Center.

By 1845, the classes and patients of the medical school moved to the Egyptian building, one of the oldest examples of Egyptian architecture in the U.S., which is still in use for classes today. In 1854, the Richmond Department of Medicine broke away from its roots in Hampden-Sydney College and became an independent institution known as the Medical College of Virginia. At the onset of the Civil War, the first state-funded hospital was erected across the street from the Egyptian Building. This hospital, as well as 13 other Richmond facilities, became home to the Confederate Army. One of MCV’s doctors, Dr. Hunter McGuire, was General TJ “Stonewall” Jackson’s personal physician. The turmoil of war, inflation and worthless Confederate currency caused MCV hospital to sacrifice its ambulance horse for enough money to remain in operation.

MCV survived the war, and moved to the forefront of clinical treatment with the introduction of the syringe, thermometer, vaginal speculum, cystoscope and local anesthesia in 1874. Prior to anesthesia, surgery was performed in patient rooms with chloroform, and surgery could only be performed in the winter months because cholera, typhoid and diphtheria made the population too weak to sustain an operation during the summer months. Also in 1874, through the binocular microscope, doctors saw for the first time that inflammation and blood cells were required for healing — so they at last abandoned the centuries-old practice of blood-letting.

The most significant event of the following 25 years was the initiation of surgical antisepsis. Spraying operating rooms with carbolic acid had been introduced 14 years earlier by Lister in England, but its adoption was delayed in Virginia, under the notion that the pure country air of Virginia was in itself an antiseptic.

In 1925, Sanger took over as dean of the School of Medicine and brought new buildings to the campus. During the depression in 1932, Tompkins-McCaw Library was built. In 1941, the South Hospital was built for $2.5 million with a donation from the Public Works Administration under Roosevelt’s New Deal. In 1952, Randolph Minor Hall was completed, and eventually named for Agnes Dillon Randolph, the granddaughter of Thomas Jefferson, and Nannie Jacqueline Minor — both girls were students at the School of Nursing. In 1963, Sanger Hall was completed in honor of the dean of the school of medicine, and Main Hospital was finished in 1982. In 1983 the Massey Cancer Center was built, and expansion of North Hospital was completed in 1986.

In 1968, MCV joined with Richmond Professional Institute to form Virginia Commonwealth University. Today it serves as the area’s only Level I Trauma Center as well as a major referral center for the Southeast.