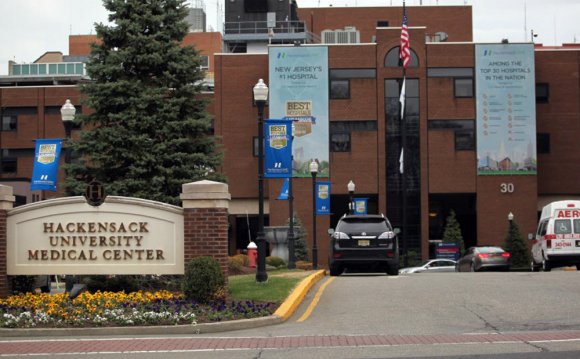 A woman who worked in Sierra Leone with Ebola patients was taken off a United Airlines flight at Newark Liberty International Airport in a hazmat suit Monday afternoon and transported to Hackensack University Medical Center after she exhibited a high fever and vomited on the flight, government officials and law enforcement sources said.

Port Authority police in hazmat suits boarded the plane, which originated in Brussels, and the woman was removed to an ambulance waiting on the tarmac about 3 p.m., said a law enforcement source. Passengers on the plane were given forms to fill out and told that authorities wanted to make sure they could get in touch with them over the next three weeks, a passenger said.

A passenger aboard the plane took and tweeted this photo.

That’s when nervous travelers began whispering, said the passenger, E.E. Charlton-Trujillo. “Everyone’s thinking Ebola, ” she said, adding that authorities did not say why the woman was taken off the plane. Ebola has an incubation period of as much as 21 days.

A Hackensack University Medical Center official said late Monday night that the woman did not have a fever by the time she was transported. Fevers are one of Ebola’s typical symptoms. The hospital’s chairman of emergency services, Dr. Joseph Feldman, said in a news release that the patient was being kept overnight for evaluation “in an abundance of caution.”

He added that the hospital’s infection control team was “taking every precaution with this patient” and was following protocols established by the U.S. Centers for Disease Control and Prevention.

The patient was identified only as a health care practitioner by authorities. They did not detail whether she is a doctor, a nurse or an aide and did not specify where she lives. Newark is one of five airports in the United States designated as a point of entry for people coming from parts of West Africa where an Ebola outbreak occurred last year, and Hackensack is one of three hospitals in New Jersey authorized to isolate and assess potential Ebola patients.

The woman was taken to Hackensack because it was that hospital’s turn in the rotation, said Alicia D’Alessandro, a spokeswoman for Bergen County Executive James Tedesco. She said that Tedesco is not aware of any other patients being sent to Hackensack since it was designated as an assessment center last year. She added that strict protocols were being followed and that “the public has no need to worry.”

The news brought media outlets from across the region to the Hackensack hospital Monday evening. State health officials did not respond to repeated requests for information.

Charlton-Trujillo, who tweeted from the plane shortly after it was boarded, said that passengers were told to remain in their seats after the plane reached Terminal B at the airport and that five people in blue hazmat suits boarded about 40 minutes later. She said she did not see the patient, who was sitting in another area near the back of the plane, and did not see her taken off the plane.

Authorities called the names of 10 other passengers who then disembarked before anyone else was allowed to leave, she said. Charlton-Trujillo said she then continued to her home in Cincinnati on another flight.